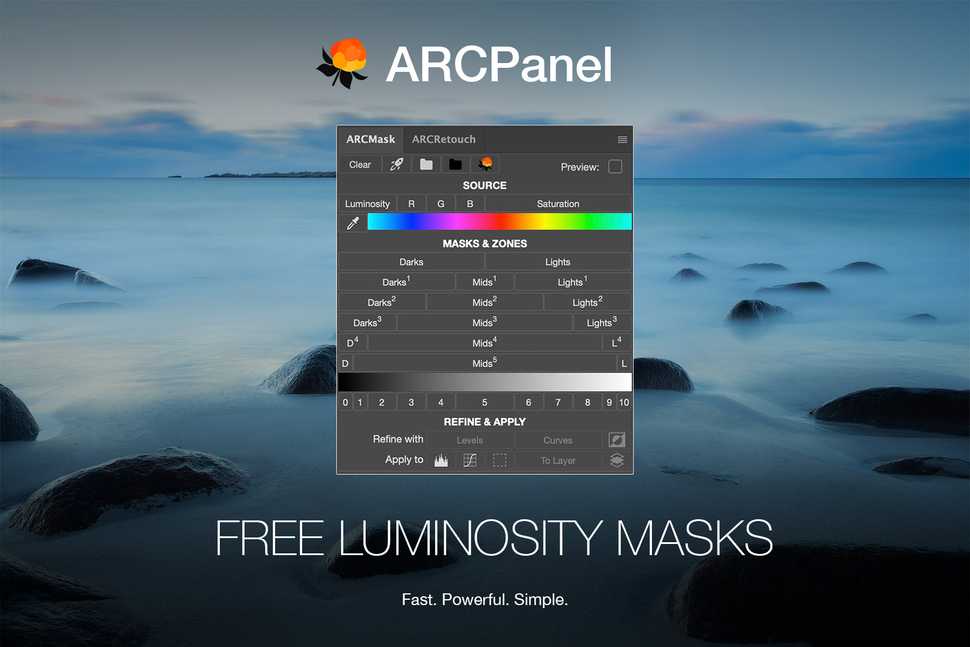 ARCPanel 3.0 is a free version of luminosity masking panel re-built from ground up and powered by a new Adobe UXP engine.

ARCPanel 3.0 is in the beta testing phase now. Some of the features are not yet fully implemented and there can be some issues. If you find anything, please send me an email at anton.averin.photo@gmail.com.

Adobe UXP is a new iteration of engines that power panels in Photoshop. Flash plugins were sunset back in 2014 replaced by CEP engine, essentially making all flash plugins obsolete. Similarly, UXP is now to replace CEP engine and while CEP panels like ARCPanel 2.2 will keep working for the next (probably) 2 years, eventually UXP will fully replace old engine.

To make sure that ARCPanel doesn't go anywhere and doesn't stop working for existing customers, ARCPanel 3.0 was built.

Visually, you wouldn't notice many changes in ARCPanel. What really changed is how things work internally.

Leveraging new powers of UXP, ARCPanel 3.0 is now even faster than older versions. It will also work on new Apple M1 laptops.

Another important change is that ARCEnhance was renamed to ARCRetouch and is now a part of ARCPanel Pro, so no longer freely available for everyone.

But the most important change is that ARCPanel 3.0 itself is now free.

Yes, ARCPanel 3.0 is free. There is no more trial, you can just install the panel and use it.

The main reason for this change is that looking at how ARCPanel 2.x was used I have noticed that there many people that do the trial, but never really become paid customers.

I find it to be unfortunate that people want a panel for luminosity masks but can't use it because it's paid and maybe they don't need all the advanced features I have built over the last 4 years.

Which is why all the masking functionality of ARCPanel will be free for everybody.

Pro version of ARCPanel will be automatically granted to everyone who have already made the purchase and can be purchased as usual on the website.

The way ARCPanel is activated will also change a bit. Instead of a single licensing key that you could use before to activate multiple copies of ARCPanel you will now get 3 different licensing keys.

You get 3 licensing keys. One key activates one copy of ARCPanel. Right-click anywhere on the panel to get to settings and activation.

If you no longer want to use ARCPanel on the computer, you need to deactivate the license in settings.

That's it, it's that simple. Just don't forget to deactivate your license when you no longer need it.

Just install it from Adobe Marketplace or by downloading from the website and double clicking on ARCPanel.ccx file.

Please make sure you have a licensed version of Adobe Photoshop and that your Adobe Creative Cloud is up to date. ARCPanel doesn't officially support non-licensed Photoshop versions.

How do I activate ARCPanel 3.0?

You will get new 3 keys for ARCPanel 3.0. Right-click anywhere in the panel and enter one of your keys in settings.

Where do I find my licensing keys?

Either in the email or in Members area on the website. Contact me if you still didn't receive ARCPanel 3.0 keys email.